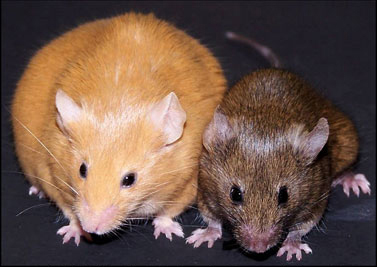 Epigenetics: we are given the building blocks by our parents, but you can decide how to use them. Rearrange them by changing what you eat and how you exercise.

“…our genes are powerfully influenced by environment and lifestyle to produce the unique gene expression profile with which each of us lives.”

And a study on mice shows that the building blocks can be changed by your parents diet and lifestyle.

“…two groups of mice gave birth to sets of identical babies carrying the same genes.  The babies were raised the same way from birth. They should have looked alike but instead, they barely looked related. In the first group, the babies were overweight, prone to diabetes and cancer and covered in fur the color of rancid butter. The mice in the second group were beautiful: lean, healthy, brown. Same nature, same nurture, radically different outcomes. What was going on in there?

“The difference, it turned out, wasn’t due to the mice’s genetic code, nor was it due to the environment. It lay instead in a mechanism that was mediating between the two. A gene in the sickly yellow babies was making a disease-causing protein called Agouti, which also affects coat color. The brown babies had the same gene, but it wasn’t making much of anything. It had mostly stopped working. The brown babies’ mothers had eaten a special diet during pregnancy: one rich in folic acid, which floods the body with tiny four-atom configurations called methyl groups. These methyl groups had infiltrated the growing brown mouse embryos and latched onto the flawed gene, shutting it down.“

Here’s a great summary with a host of other examples of epigenetics from things like how starvation and gastric bypass effects children and grandchildren of the discontented.

Nature vs. nurture? Now there’s a third option. Diet and the environment of the parents and possibly even grandparents. Thoughts or comments? Post them below.